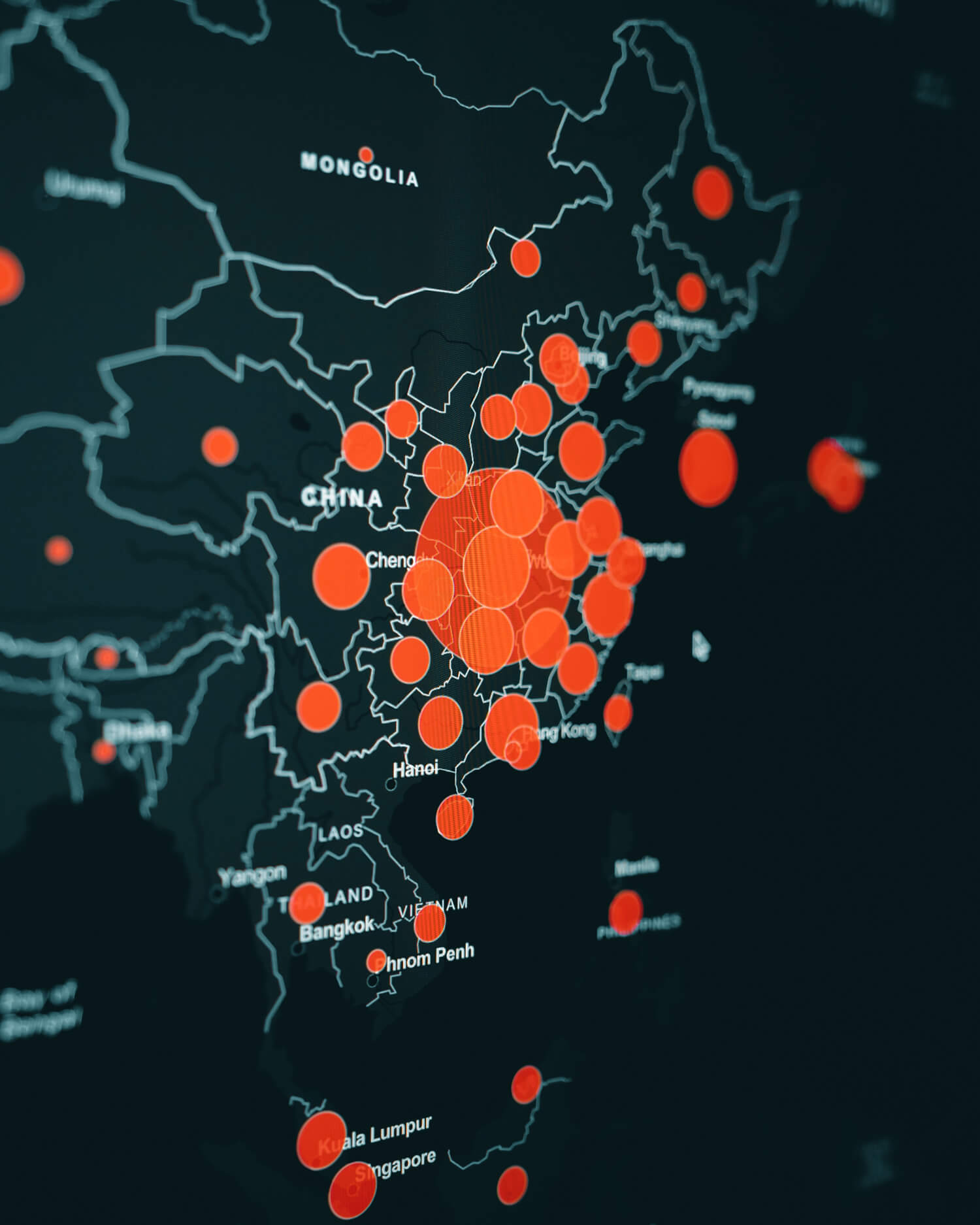 Biocare Lifesciences Inc (BLI), a Philippines based pharmaceutical company who brought the brands of Remdesivir and Favipiravir in the country last year, announced the launched of the first branded generic of Tocilizumab (Temziva) 400mg/20mL Solution for infusion.

Tocilizumab is an Interleukin-6 (IL-6) receptor blocker that can effectively block what is known as the IL-6 signal transduction pathway, which plays an important role in Cytokine Release Syndrome.

“The availability of tocilizumab in the Philippines is another milestone in the fight against Coid-19,” said Dileep Tiwari, managing director. “As a healthcare company, it is our responsibility to make available products of the highest standards and quality to address high unmet needs among our patients.”

“We are honored to be able to make available tocilizumab in the Philippines, to serve as a new possibility for treatment of severe Covid-19 patients who have not already had access to life-saving drugs. With this development, we hope to make tocilizumab available as widely as possible to help save lives,” said Suchet Rastogi from SRS. 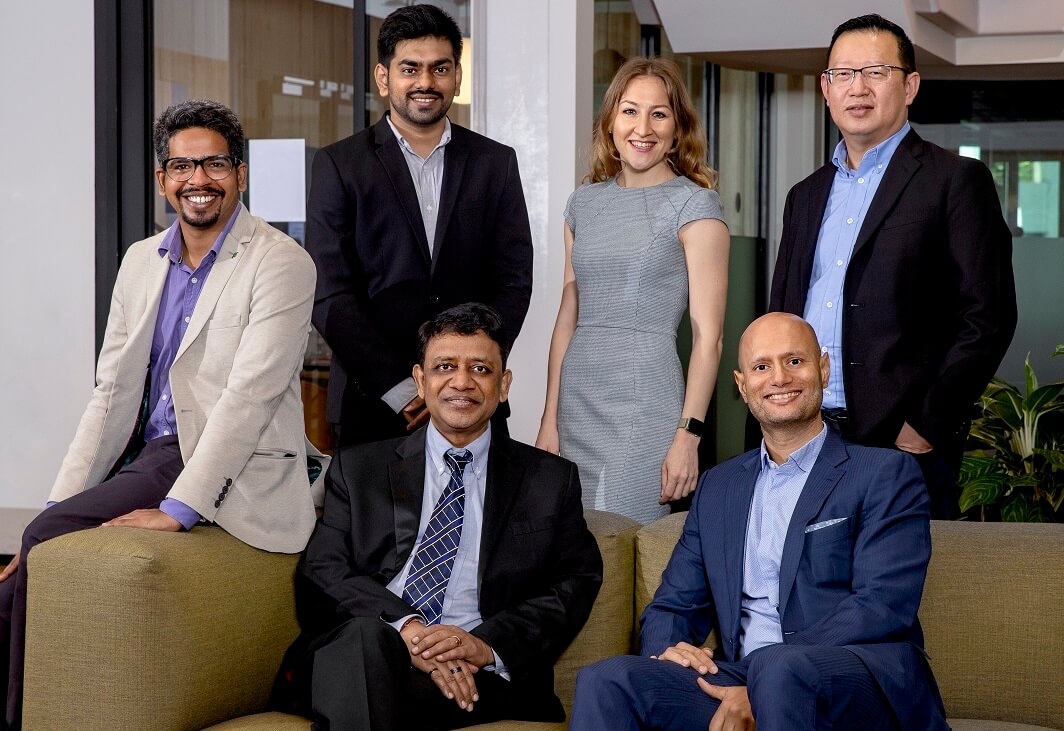 The global orthopaedic implant market size is predicted to reach US$64.0 billion by 2026, fuelled by the rise of ageing populations. However, significant unmet needs remain for patients who undergo surgery with permanent bone implants and metal fixtures, with high rates of post-surgery complications and revision surgeries being required in approximately 12% of cases within some countries. Patients face as much as US$10,000 in additional costs for revision surgeries to remove implants.

Magloy Tech’s bioresorbable implants are developed considering concerns associated with the use of bioresorbable magnesium alloys in clinical applications such as rapid degradation and usage of rare-earth alloying elements. The technology has the potential to provide surgeons and patients less complications compared to more traditional implants, as well as reduce the complication-associated burden on health systems such as refracture risks, anaesthesia risks and healthcare-associated infections (HAIs).

SRS Life Sciences and Magloy Tech’s partnership will see the technology move into early-stage human trials in India this year with the aim of ultimately bringing the innovation to patients globally, starting with a South East Asia focus.

Via the agreement, Magloy Tech and SRS Life Sciences will be joint owners of all intellectual property produced within the collaboration. The new generation implant will be developed for human use with the development programme designed to deliver approved human use from 2024. 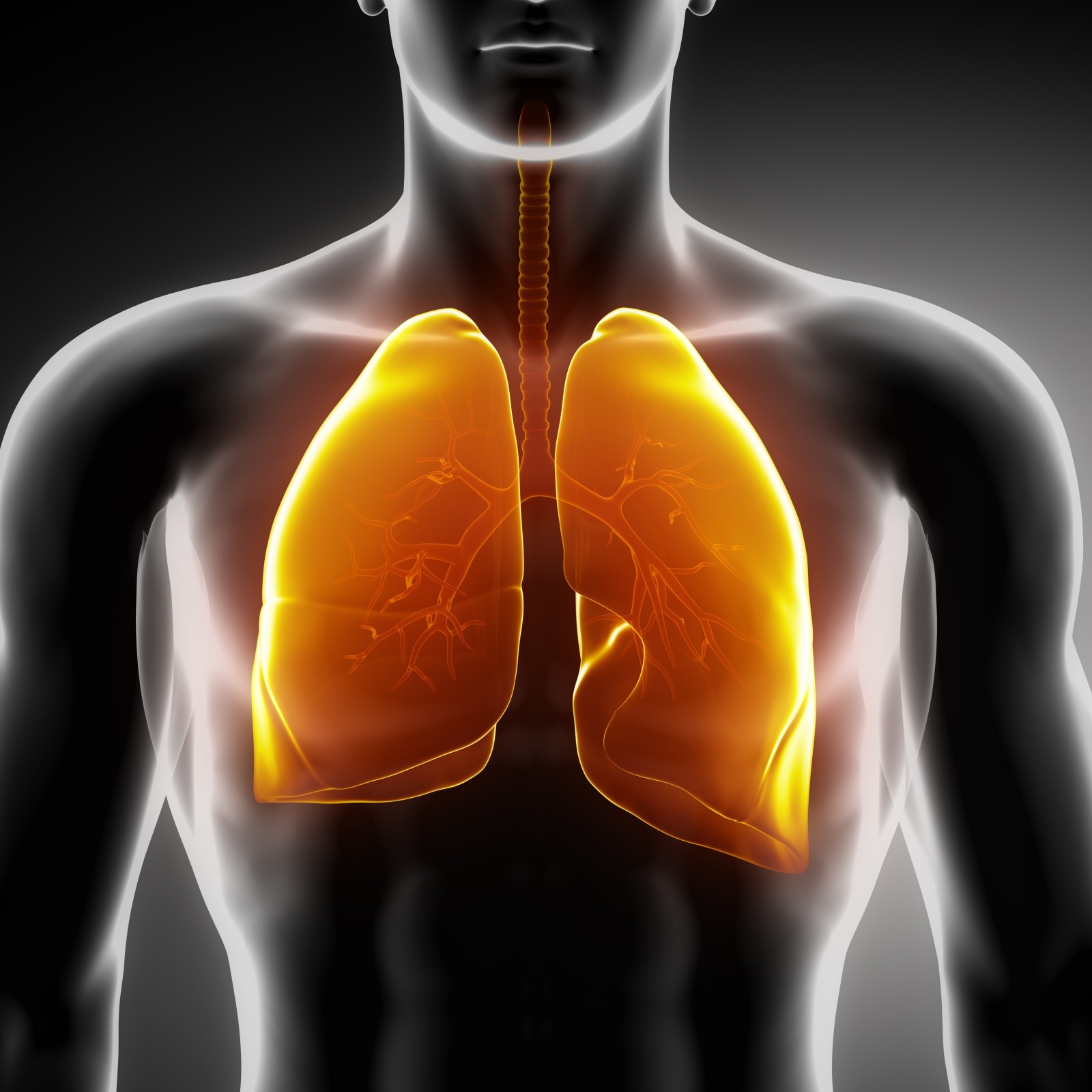 The CPhI fair held in Barcelona from 4 to 6 October saw the announcement of an agreement between Manremyc, a spin-off of the Germans Trias i Pujol Research Institute led by Dr. Pere-Joan Cardona, and the SRS Life Sciences Group, a Singapore-based pharmaceutical corporation, to begin marketing the food supplement to fight tuberculosis in 16 countries in Asia and Africa, where the incidence of this disease is high. 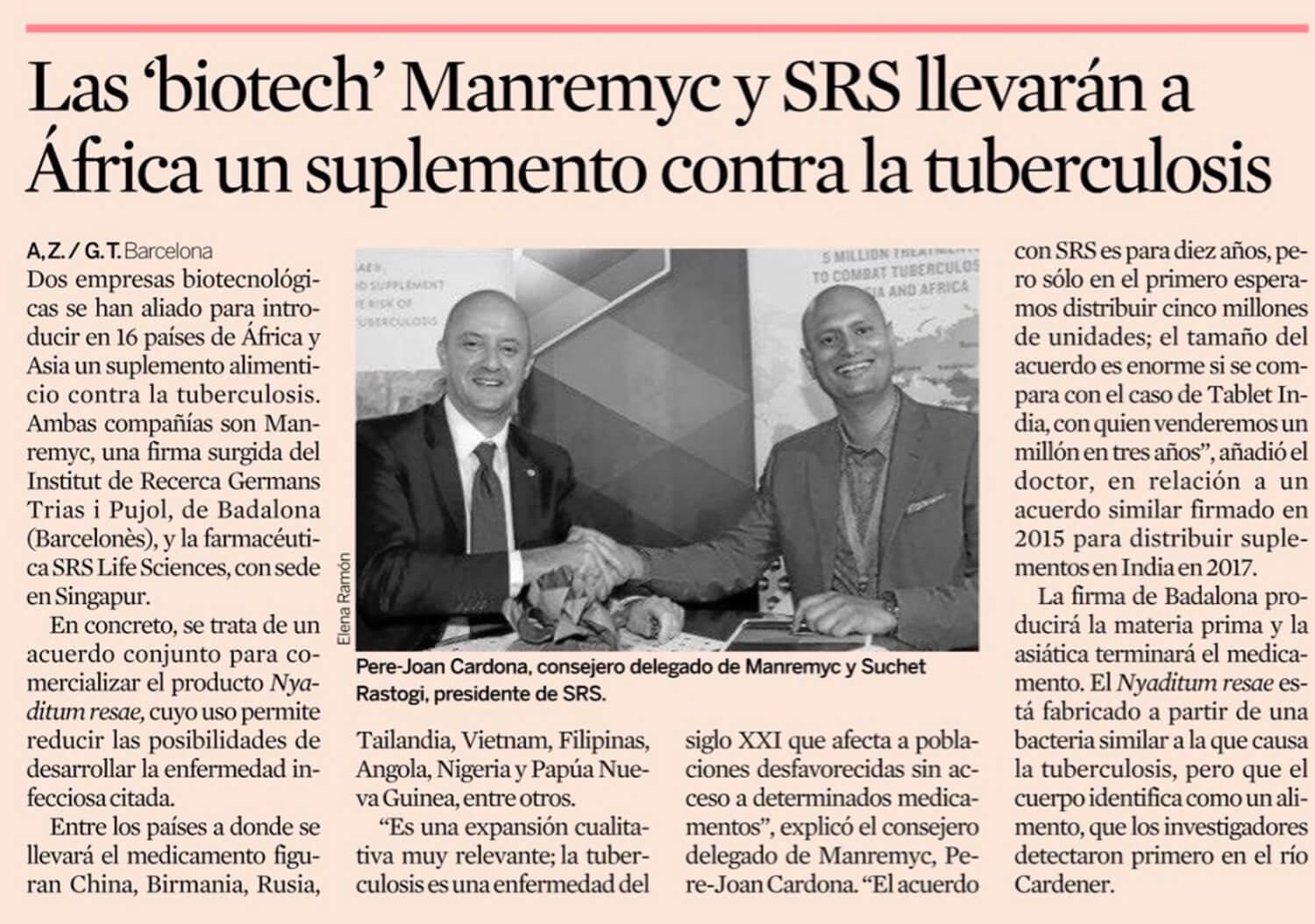 The deal the two companies closed will distribute the first food supplement that, as has been proven in clinical trials, triggers an immune response that protects against the bacteria with pills administered for two weeks, decreasing the risk of developing tuberculosis. Registered under the brand Nyaditum resae, the supplement will be affordably priced and reach more than five million people starting in the first quarter of 2017.

“It is a highly significant qualitative expansion. Tuberculosis is a 21st century disease that affects the most disadvantaged populations who don’t have access to specific types of drugs,” explains Dr. Pere-Joan Cardona. The countries that will have access to the probiotic are China, Russia, South Africa, Thailand, Vietnam, Philippines, Indonesia, Ukraine, Ethiopia, Georgia, Papua New Guinea, Myanmar, Nigeria, Angola, Uzbekistan and Kazakhstan.

The food supplement is already on sale in India and Nepal, two of the countries with the highest incidence of tuberculosis, through a deal Manremyc reached in 2015 with Tablets India to distribute one million units over three years. The agreement with SRS is more ambitious, as Manremyc hopes to reach five million people initially and would like to extend the agreement to 10 years.

The company also hopes to begin distributing the product in Europe starting in 2017, with support from Reig Jofre.

Manremyc’s product is manufactured from a type of bacteria that is very similar to the one that causes tuberculosis, but which the body identifies as food. Researchers at the Germans Trias i Pujol Research Institute Experimental Tuberculosis Unit (IGTP-UTE), led by Dr. Pere-Joan Cardona, first identified the bacteria in the Cardener River.

This article first appeared on the Biocat website on 6th October 2016. To read the original article, click here. 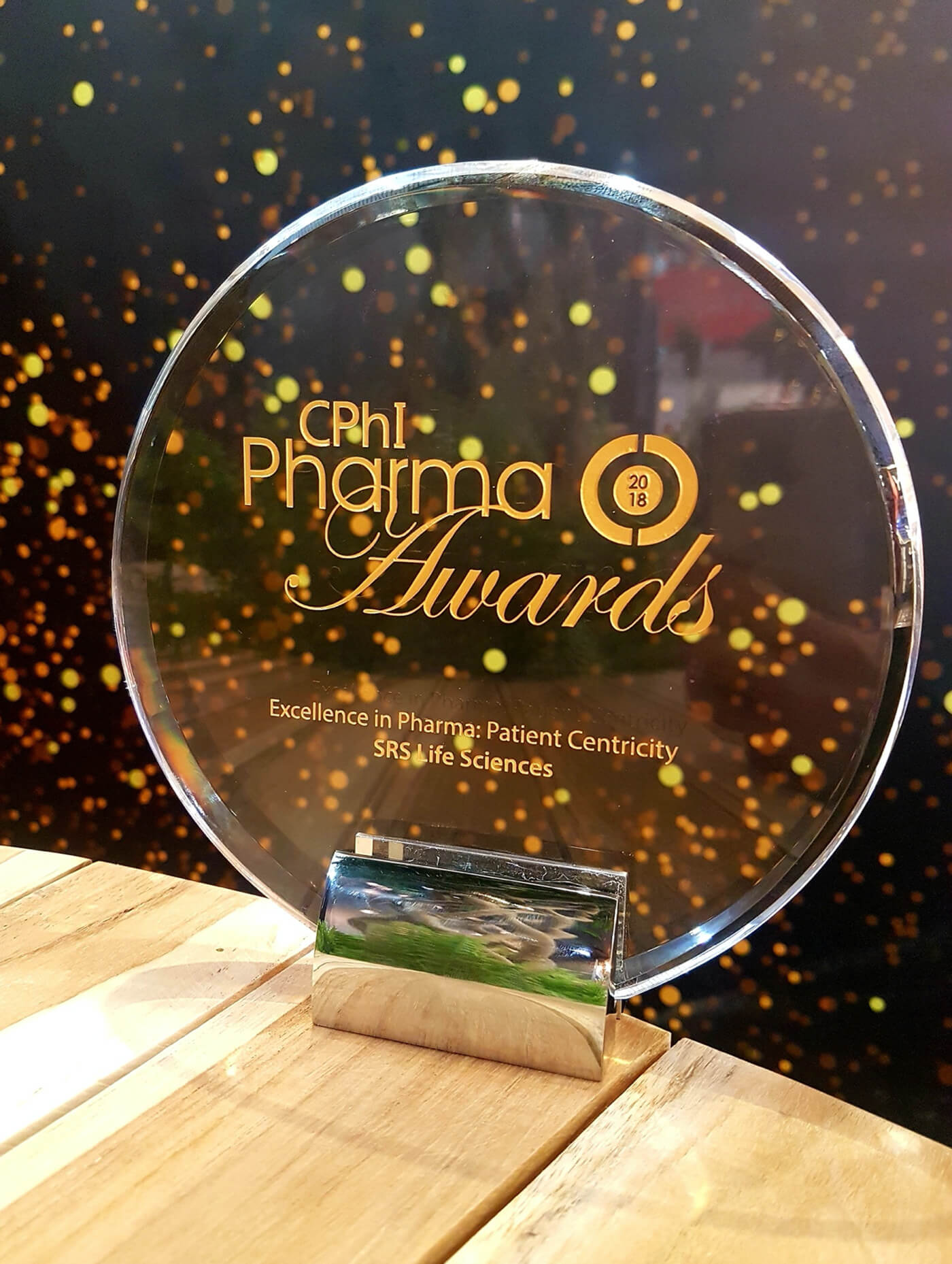 SRS has won the CPhI Award for Excellence in Patient Centricity and we couldn’t be prouder. On 18th October, a week after CPhI had ended, the coveted award was in our Chile offices, the first step in a world tour that will take it from Santiago to Dar-es-Salaam, from Mumbai to Hanoi and eventually Singapore. Each team, each employee will get a chance to see and hold the trophy; a reflection of the hard work and effort each of them has put into the journey of making this award a reality. 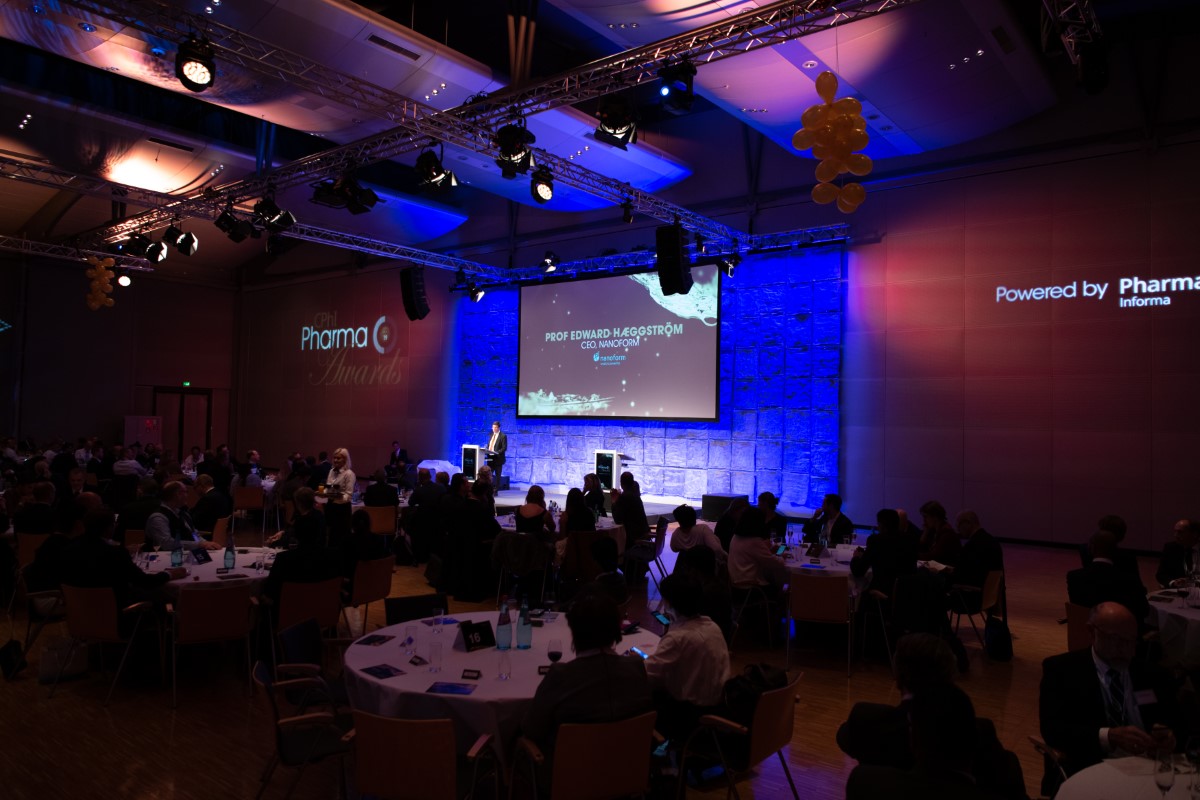 A number of years back, the story of our Unistraw delivery system began. It wasn’t the first foray into finding novel ways of making drugs more accessible to patients or ensuring that drug delivery was more effective or easier to comply to – we have gelatin pastilles that increase the rate of absorption of drugs or suppositories that defy the need for cold chain transport systems – however, it is the most vivid representation of what we believe in as a company: Finding better ways to make a real impact on patients and caregivers alike.

The Unistraw itself, is a versatile straw delivery system that was born of a need and desire to improve compliance amongst young children. Every aspect of the straw is designed with patient and caregiver in mind.   We knew that there were a number of issues with traditional medicines, from swallowing to tastes. Administering the medicine was a headache for parents and a traumatic experience for the children. Finding a solution that gave children a fun and exciting experience was the key. The straw delivery system made sense.   Every aspect of the straw has been designed and redesigned to meet all the nuances of a patient’s experience. 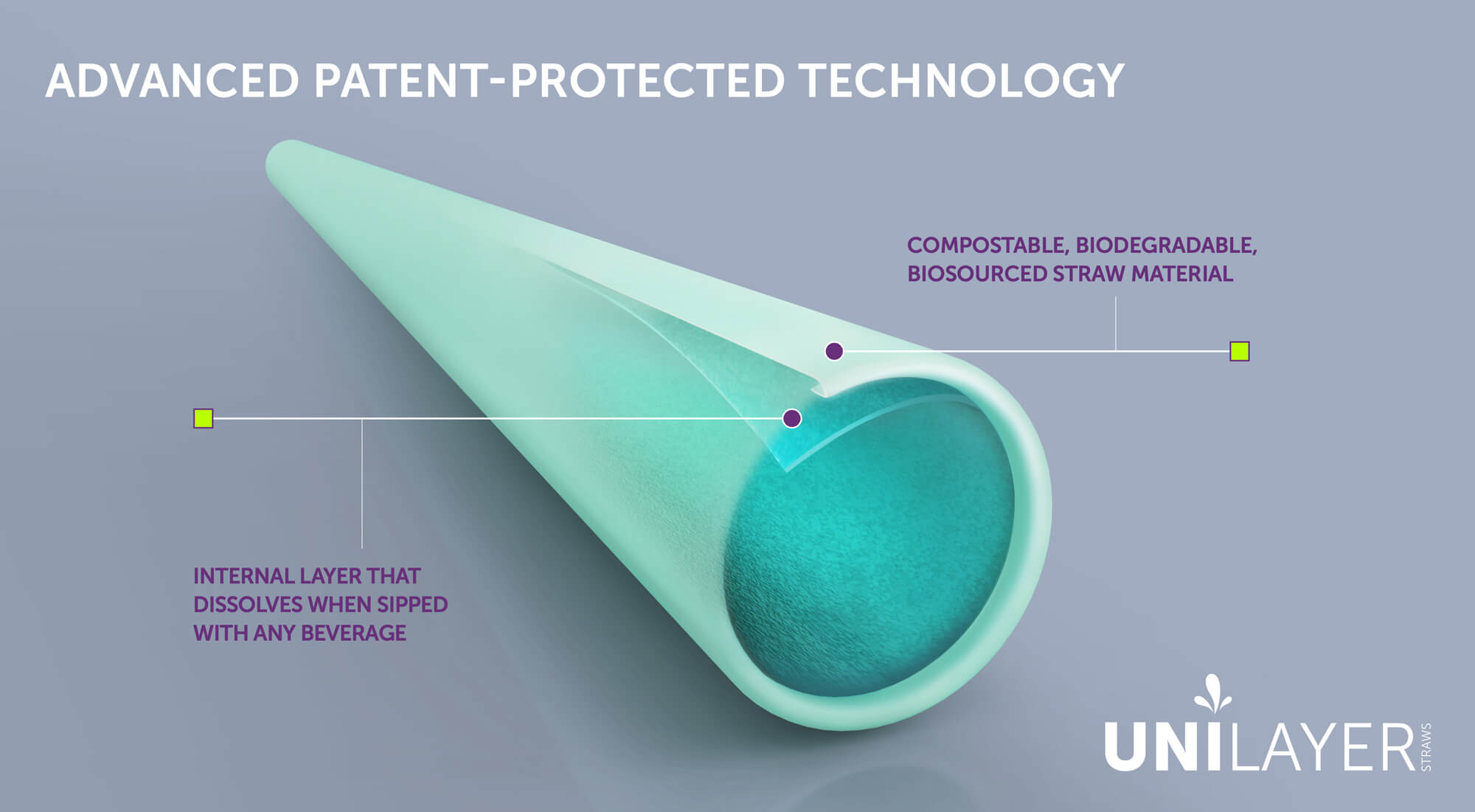 By focusing on the treatment of the patient, we have been able to cater for the wellbeing of the patient, whilst considering the needs of the caregivers and taking into account the social and environmental implications of drug delivery in a straw format.   To be awarded for Excellence in Patient Centricity is a validation of what we believe in and all the efforts we have put in over the years. This is more than an award, it is the one we have been waiting for. 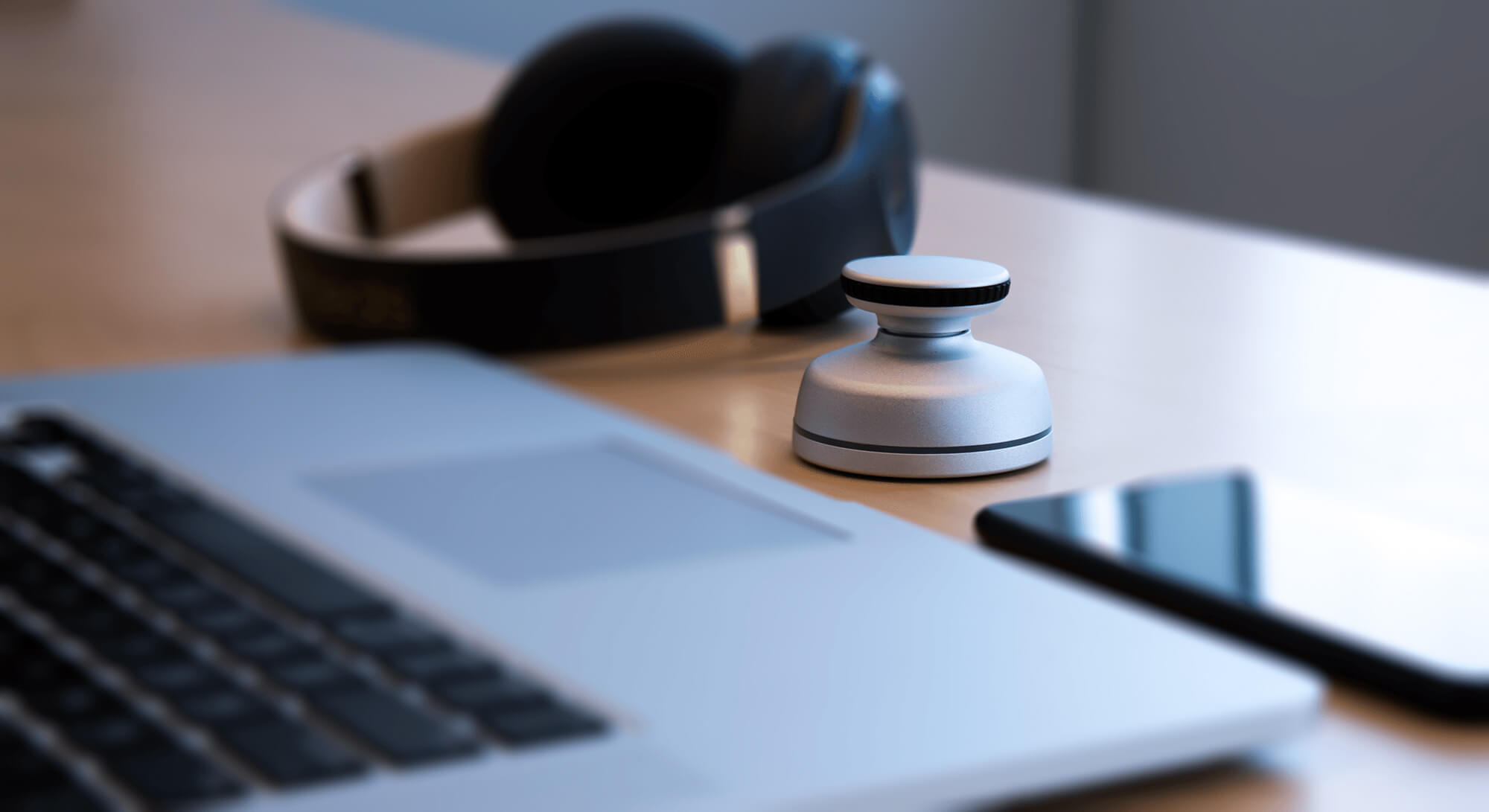